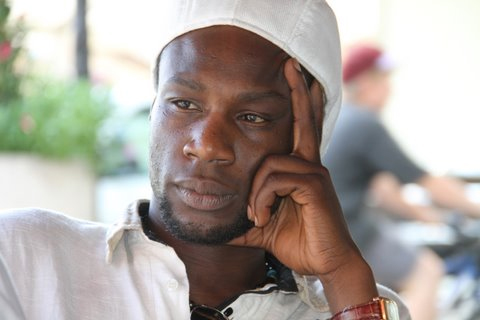 Thierno DIALLO was born in Senegal.

He tells tales from Africa and elsewhere for young and old alike, in festivals, libraries, theaters, social centers, schools, etc.

Winner of the Grand Prix des Conteurs 2006 in Chevilly-Larue, he was part of the Labo team at La Maison du Conte in Chevilly-Larue for three years. He worked with Abbi Patrix, Pépito Matéo, Praline Gay-Para, Didier Kowarski, Michel indenoch...

In 2008 he created Les femmes du Waalo, co-produced by the Limoges Storytelling Festival, with the support of the Maison du conte; then Koumba with the harpist Florian Genilleau. In 2011 he adapts and directs. La randonnée de Samba Diouf, or the story of a young shepherd who was forcibly enlisted among the Senegalese riflemen in 1914-1918, with the flutist and double bass player Lisa Raphel. His next show Kalika le plumeur de lune, based on a tale by G. de Cagliari, will explore physical disability.

Thierno Diallo is a founding member of the association Amoon na fi, which aims to maintain and disseminate the oral tradition in France and Senegal.

Since 2008, he has organized a storytelling festival in Dakar and Hann, a suburb of Dakar.

In 2014, he created the company Diak'art lo which gathers the artists, musicians, technicians present on his creations. This name is a play on words from "Jaakaarlo" which means "to face" in Wolof.

He inscribes his practice of storytelling in life, because he is convinced that storytelling creates links between people.