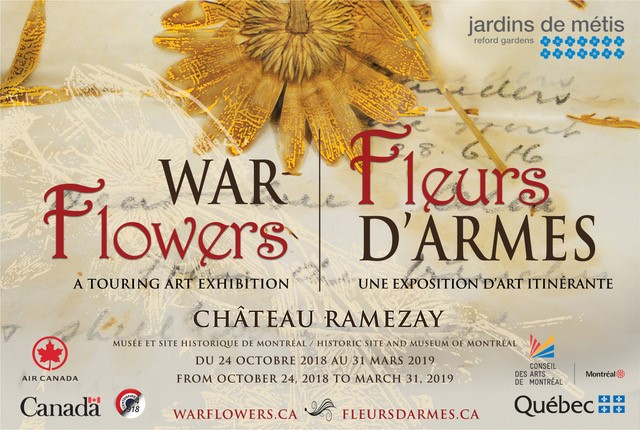 Montreal, Quebec, October 30, 2018 – During the First World War (1914-18) Canadian soldier Lieutenant-Colonel George Stephen Cantlie picked flowers from the fields and gardens of war-torn Europe, pressing and drying them within a book. Every day, he sent one flower home, along with a short, affectionate note to one of his children, including his one-year-old baby daughter Celia in Montreal, so that, as she grew up, she would have something to remember him by in the event he didn’t survive that terrible war.

Flash forward. A century has passed, and with it all living memory of the First World War. But Cantlie’s letters and flowers have been preserved and ultimately passed to his granddaughter, the late Elspeth Angus, in Montreal, who lovingly preserved them in a special red box. And that’s where, four years ago, a Canadian filmmaker, Viveka Melki, to her utter amazement, first encountered them, speaking to her from the past, and the germ of an idea was born in Melki’s mind.

Now, more than one hundred years after he picked the flowers, and on the 100th anniversary of the end of that horrific conflict, Cantlie’s touching wartime ritual can be experienced anew in WAR Flowers – A Touring Art Exhibition, now running through March 31. 2019 at Château Ramezay - Historic Site and Museum of Montreal.

“WAR Flowers”, developed by exhibition curator Melki and produced by Les Jardins de Métis/Reford Gardens (Alexander Reford, director) in Grand-Métis, Quebec, is an art show presenting Cantlie’s original century-old preserved letters and flowers, but only as a starting point. From that, Melki has created a multi-sensorial, emotionally-involving vision of the effects of war on all who experience it personally. The exhibition provides visitors with a unique, immersive experience centred around Melki’s intense personal belief in the resilience of the human spirit.

Melki has reinterpreted ten of Cantlie’s flowers using floriography, a Victorian-era method of communicating meaning and emotion through flowers, to tell a larger story of human nature in the landscape of war.

As conceived by Melki, the exhibition is comprised of ten stations, representing ten of her core beliefs about the nature of war. Each station showcases a different flower picked by Cantlie and draws on his wartime letters, exhibited publicly for the first time. Actual artifacts of the First World War era complement each station.

Each station also profiles a Canadian of The Great War era who exemplified, through their personal story, one of curator Melki’s ten core beliefs about war. WAR Flowers features John McCrae, Georges Vanier, Elsie Reford, Jean Brillant, Talbot Papineau, A.Y. Jackson, Percival Molson, Julia Drummond, Edward Savage and George Stephen Cantlie. The links between these individuals provide diverse perspectives on the Canadian contribution to the war effort. All these men and women had strong roots in the city of Montreal.

Other members of the WAR Flowers creative team are Céline Arseneault, botanist and librarian for over three decades at the Montreal Botanical Garden, who oversaw the conservation and mounting of the fragile 100-year-old flowers and letters; Normand Dumont; the exhibition’s designer, who transformed Melki’s creative vision into a unique, sensory and physical reality for exhibition visitors; Marie-Claire Saindon, the exhibition’s music composer; and Claude Langlois, creator of the sound montage.

Complementing the exhibition is the dedicated website www.warflowers.ca, featuring profiles of the artists who created the elements of the show and offering behind-the-scenes access to the design process.

“Château Ramezay is excited and proud to be hosting the remarkable ‘WAR Flowers’ exhibition in Montreal,” said André Delisle, Executive Director and Curator, Château Ramezay. “This exhibition has already been a huge popular success, emotionally moving tens of thousands of visitors during the first four stops of its tour in Canada and France. Now it reaches its final destination, ‘coming home’ in the truest sense, to Montreal. ‘WAR Flowers’ is a jewel of a show, and an imaginative, innovative example of the power of art to enrich and transform our understanding and experience of history in unexpected ways.”

The exhibition is presented at Château Ramezay from October 24, 2018 to March 31, 2019. This will be the final stop for the exhibition on its five-location tour that began in June 2017 at Les Jardins de Métis/Reford Gardens in Grand-Métis, Quebec, and then travelled to the Canadian War Museum in Ottawa, Campbell House Museum in Toronto, and the Visitor Education Centre of the Canada Memorial in Vimy, France.

For interviews and further information about WAR Flowers: A Touring Art Exhibition: